On the 18th and 19th of October, the 13th SAE Alumni Convention, sponsored by Stadt Köln, took place in Cologne for the second time in a row. More than 2.500 people visited the two-day event at the Palladium, where an extensive seminar program with more than 45 talks and seminars about Audio, Film & TV, Games & Animation, Cross Media, Music Business and Web was offered, as well as a fantastic exhibition with more than 50 exhibitors and 100 brands like AIDA, Arri, Avid, Blue Byte, Cryengine, DJI, Focusrite, Neumann, Rednet, Sennheiser, SPL, Steinberg, Unity 3D, Vision2see, Wacom and Yamaha.
In a special start-up area, people were able to present their indie-projects and games and the company „Startplatz“ gave start-up advice to the interested visitors.

In the opening panel of the SAE Alumni Convention 2017 „Vom Start-up zum Millionär: der SAE Absolventen Talk“ (From a start-up to becoming a millionaire: the SAE graduate talk), Chris Müller, Managing Director, SAE GSA, talked with SAE graduates about the challenges of being self-employed and establishing one’s own successful business.
Among the participants were SAE graduate and Grammy-winner Richard Furch from Los Angeles, SAE alumni Christian Raters and Julian Meybohm from the Game&Audio Studio Lyrebird based in Berlin as well as Robin Hasenbach, founder of N-Gon Entertainment, a start-up for VR-Games in Cologne. Achim Quinke from Quinke Networks presented the discussion.

Among the highlights of this year’s seminar program with more than 45 speakers from all around the world were the talks of award-winning film music composer Gary Marlowe with „A Brief Lesson In Taste: What makes a good film score?“, SAE graduate und Grammy-winner Richard Furch “From Germany to USA to China – A Mixer’s Journey”. The workshop „The secret of founding a successful company and marketing strategies“ with Sven Franzen, Tiger Marketing Group GmbH, and Till Zier from Social Trademark GmbH with „How to utilize Influencer Marketing and Social Selling“. VR/AR-expert Thomas Bedenk gave an overview about the possibilities of VR in „Interaction Design for Virtual Reality“. Senior Concept Artist Luis Guggenberger, Industrial Light & Magic, explained the „Concept Art for feature films“ and SAE graduate Miles Tost, Level Designer at CD Projekt RED, inspired the audience with his talk „Crafting Worlds – Guidelines for Making Better Playgrounds“. 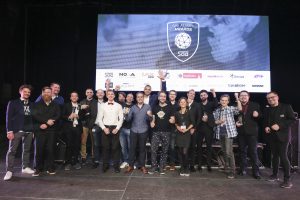 On Thursday evening, the winners of the 12th SAE Alumni Awards and SAE Students Awards were announced and honored during a festive gala at the E-Werk. The ceremony was hosted by Mehdi Benkirane. A total of 13 awards were given to alumni and students, six SAE Alumni Awards and seven SAE Student Awards. In the aftermath of the award gala, everyone celebrated at the big aftershow party until late night to the sounds of a live-band and DJ Julian Smith.