Many students ask me how to learn composition principles in a quick and efficient way. There is no easy answer to that question. It is also not possible to learn everything within a week. I would say that mastering composition skills is a lifelong process. Sounds scary? Maybe. But there is no better way to become an artist. Start the adventure with composition principles from watching movies by Lech Majewski, internationally known Polish artist, and learn about composition from his stunning video images.

As an art educator, I am fascinated with artworks by Lech Majewski. He is a great example of an artist continually seeking new challenges; realizing himself as a film, theater and opera director, writer, poet, and even painter. His video images are symbolic, often surrealistic, marked strongly by artist’s individual experiences from childhood and youth. Movies by Majewski show a sort of “uncommon beauty” (term used by Darryl Macdonald) that closes the viewer in the world of his unique artistic visions. It is not the easiest type of cinema, but watching at least one film by Majewski is a must, especially for film and photography students. Personally I recommend you “The Mill and the Cross” (2011).

“… the narrative is not the point—the extraordinary imagery is. The painting literally comes to life in this spellbinding film, its wondrous scenes entering the viewer like a dream enters a sleeping body.”
– Graham Leggat (Films/The Mill and the Cross)

“The Mill and The Cross” was inspired by Pieter Bruegel’s famous painting “The Procession to Calvary” (1564). Thanks to innovative digital technologies like CGI, Majewski managed to show the stories of 12 characters from the painting. It took three years of hard work to finish the movie that, as Majewski says, could be compared to an imaginary tapestry consisting of multilayer perspectives, atmospheric phenomenons, and people. Watching this unique movie is like becoming a part of a painting, which shows the everyday life of Flanders in the 16th century in the context of Spanish Inquisition. The artist paid a lot of attention to composition details in every single scene, which resulted in diverse multidimensional effects. Take some time to watch “The Mill and The Cross” and do not get discouraged by its slow tempo. Sink into the unique imagery and learn about composition principles!

Light
The light in “The Mill and The Cross” is rather delicate and soft, repeating light effects used by Bruegel in the painting. In some scenes, the author uses stronger chiaroscuro, which is more dramatic. Observe the changes in light intensity and color in the movie. How do they influence the reception?

The Rule of Thirds
Many scenes in “The Mill and The Cross” are built according to the rule of thirds. Do you already know what is it about? If not, do some research or read my other article explaining the Rule of Thirds.

Perspective
Majewski often changes the perspective. In some cases, we look at things from the bottom or from above. Many scenes are built with the usage of aerial perspective as well. Pay attention to the changes of perspective in the movie. How do they influence the overall reception? Do they change the dynamics of the film?

Watching “The Mill and The Cross” is an extraordinary experience, so do not wait too long and get the movie! Just remember to be patient and come back to it a couple of times. It will surely pay off in a better understanding of composition principles based on both Bruegel’s and Majewski’s masterpieces.

Learn more:
Lech Majewski’s website
“The Mill and The Cross” (2011) 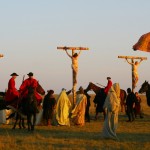 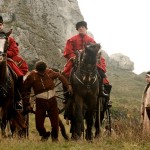 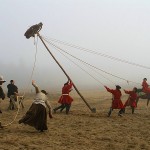