Have you ever heard about the Rule of Thirds? It is a very simple and basic composition principle. The usage of it can change the way you look at images! Everybody wants to create beautiful and unique pictures, but it seems not possible without mastering the composition skills, so find a moment to read this short article. Dear filmmakers, photographers, journalists and graphic designers, welcome to the magical world of visual imaging!

Text and photos by Joanna Wróblewska

The Rule of Thirds is an essential painting, photography and filming compositional technique. Easy to learn, yet extremely powerful, it will make your pictures more appealing. It is quite important to be familiar with it, while there are many cases when it is okay to break it. Let’s start with a little bit of theory!

1. Order the chaos
Human beings were always excited about classifying things and putting them in order. Isn’t that strange that we really like to look for patterns everywhere? The ancient Greeks were fascinated with the variety of patterns existing in nature and based on them came up with a “proportion guideline” that we successfully use till now: the Golden Section. This particular proportion became the standard for architecture, painting, photography, filmmaking and design.

Artists started to experiment with the Golden Section and at some point noticed that our eyes like the divisions into threes. Based on that knowledge they developed the Rule of Thirds, which is all about dividing a rectangular into three equal horizontal and vertical sections. Placing the most important elements of the picture close to the crossings of imaginary lines of the grid seemed to improve the composition, making it more stable and attractive to the viewer’s eye. The Rule of Thirds quickly became the most well-known composition principle, so do not ignore it and start to use it yourself!

2. A bit of practice
It is very easy to compose a picture with the subject placed precisely in the middle of the image. Sometimes it is a good choice, but in most cases it will be just boring… Start learning about the Rule of Thirds from drawing a simple grid and analyzing it: cut a circle and move it around the grid. Begin by placing the circle in the center, and then move it slowly around. Have you already noticed that the composition is more balanced when the object lies closer to the lines themselves or their crossings?

Make the next step and look at chosen pictures by legendary photographers like Henri Cartier-Bresson, Robert Capa or André Kertész. Analyze their photographs and search for different usages of the Rule of Thirds. Is it easier to recognize the pattern?

Now take a camera or a smartphone, imagine the same grid and start to shoot. Search for the Rule of Thirds anywhere you go and exercise! Make a short movie with attention to the positioning of the objects. In filmmaking, it is also important to use the Rule of Thirds consciously. Check how Lech Majewski did it in his beautiful movie The Mill and the Cross (2011).

3. Check it and break it!
Do not forget that in visual arts, all the rules were at some point broken, and this is how the modern art was born. One day you will feel confident enough to act against the Rule of Thirds. Do not be afraid to do so and enjoy the creation process. And what if you make a mistake? No worries! Failures are natural, and they happen to all of us. Without making them we do not truly develop. Learn to trust yourself and ask for feedback. Your SAE teachers and advisors have trained eyes and will support you in whatever you are working on. 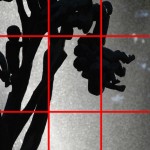 The Rule of Thirds: sculpture 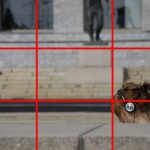 The Rule of Thirds: cityscape 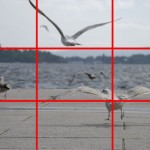 The Rule of Thirds: birds 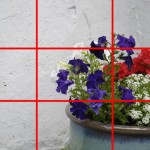 The Rule of Thirds: flowers